Any business idea could work if you want to make it work and if it is the only business of its kind in the town, then you surely are in for a success ride. Roger Fraser must also be prepared for this roller coaster ride when he decided to open his sewing machine repair business which was the first of its kind in his hometown Yellowknife. When most of the people plan to relax after their retirement, Roger decided to go for this business idea but he sure did not expect it to be so busy.

Read Also This Blog :- Sewing Machine Repair – Some Important Facts For The Users To Be Aware Of

Fraser has fixed a several hundred sewing machines since he opened his shop with an average four to five machines each day. Isn’t it fascinating for a business that was not even there at the first place and still people were able to cope without it as well. It shows how an opportunity sometimes shows itself  and people just take it and here you have, a successful business right there. With the overwhelming response which even Fraser did not expect he says, "I like to slow down in the summer,I'm retired you know." Anyways, what do you think made this idea so successful. Yes, one is ofcourse the non availability of any such shops in the town but most of all the long overdue, waiting to be serviced sewing machines in the town. As estimated by the owner, some of the machines were not serviced in 10 to 15 years. That’s right and why because it used to cost more for freight than the actual repair of the machine. With the freight cost come down, people actually made sure that they get their sewing machine serviced and it was definitely an easy job to do at first.

As Fraser said, "You open them up and you see the grease in them and the oil has turned to a white and yellow putty so that slows your machine down and makes it sluggish. Once you clean them up and re-time them, they work properly.”

So what motivated Fraser to take up a unique business like this in his retirement years when most of the people plan to just sit back and relax with their  tv and beer. Oh yes, as they say, “Behind every successful man, there is a woman.” Fraser’s wife Karen Wright-Fraser who is an accomplished seamstress encouraged him to take this opportunity up and as we said there have been no turning back since then.

When asked about his wife, Fraser said, "She was the same as everybody else. A machine would break down and she just bought another one. So she said, 'why don't you repair sewing machines?'" Various set of features existings in latest sewing machines.

Fraser’s clientele is widening with each day. Currently it includes mostly individuals, schools and sewing groups. One of his client, Pryftupa said, “I was delighted with the work that Roger did," She also said that two of the machines that Fraser repaired for her are now working "like new." There are a lot more happy clients who adore this shop and making Fraser visit to do timely servicing and repairs. 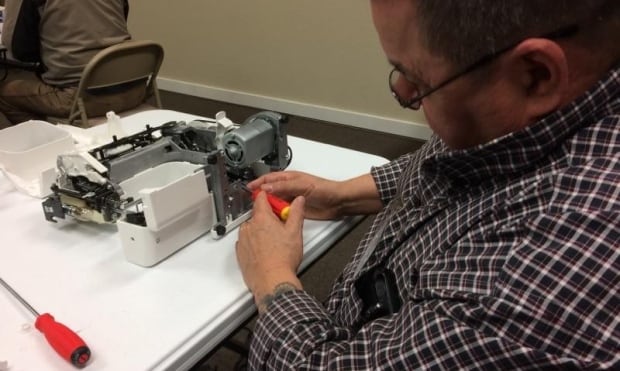 A recently added service to Stich’in Gwich’in sewing machine repair Business is the scissors sharpening which is welcomed by people working with leather and moose hide.

This new business for Fraser has not been an easy journey and does include a lot of challenges but despite all that, he is motivated each day to make his way through all the difficulties.

He said, "I've been working since I was 15. This is work I enjoy and I can do on my own time. I might be down in the shop at 9:30 or 10 at night working on a machine, or early in the morning or take the day off. There is no stress and deadlines,A lot of people are happy I'm here … I am too,"